I was intent on going one last time to my favorite japanese goods store before leaving and I thankfully managed to do that, along with hanging out with my best friend. Aside from rice, tea and the usual noodles from the asian grocer, I couldn't resist a few of the really cute (and I must admit, mostly unecessary) items from Taiyou, my favorite shop in the 13th district of Paris. They stock up on plushies, bento, stickers, pens, contact lens cases,- on a side note, they also import J- and K-music and band goods, and sell manga. So here's a quick picture post to show you what I got. 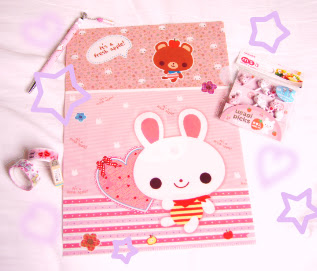 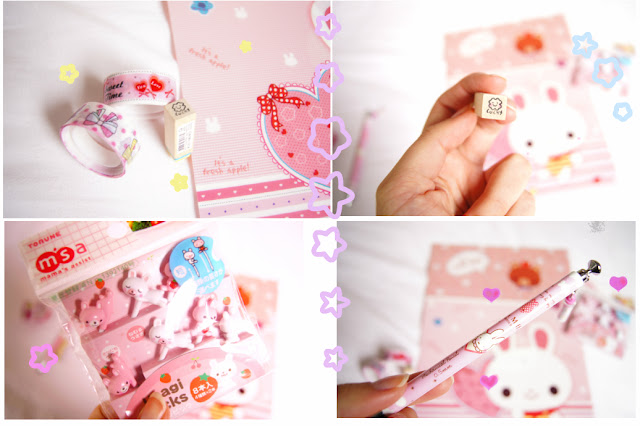 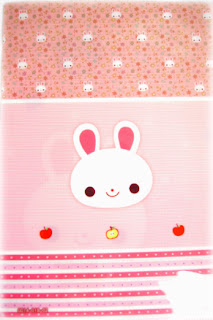 I occasionally come across (or rather deliberately go out of my way to get into my hands) a very lolita-worthy piece of work, whether a book, manga, movie, anime or drama. Since I'm always in search of new ones myself, I'll review what I find in the hope that other lolitas may take their favorite fashion to a new level. I also hope in time to create a vest "loli-library" (lolibrary was already taken...)comiling titles of interest to lolitas. 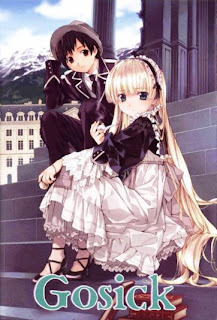 Starting off with the anime Gosick! First off, there will be some mild spoilers in my review, but I will also warn you of any major spoilers ahead, so pay attention!


Very briefly, Gosick (japanese pronunciation of "gothic") takes place in 1924 in the imaginary counrty of Saubure and is the story of Victorique De Blois, held captive in a tower/libary by her father the Marquis, and of Kujo Kazuya, an exchange student from Japan at the Sainte Marguerite Academy. Together, with Kujo's talent for stepping into trouble and Victorique's intellect, they solve mysteries gravitating around folk tales and the elusive Gray Wolves, of which our gothic heroine is a descendant. But they slowly uncover a much darker plot to reshuffle the axis of power in Europe...


What Gosick is first and foremost, is a hop on the recent trend of europeo-christian gothic fanservice which followed the success of Kuroshitsuji. Nothing wrong with that, and I watched the anime for that reason (thankfully though, it had nothing to do with masters and butlers). So the series starts out on a Sherlock Holmes-y feel - Victorique even has a pipe; you've got to love the un-lolita hoby! It is pleasant, but unfortunately the problems were sometimes too easy to solve. It results in our heroine stating the obvious to a mildly impaired Kujo, and lacks suspense. Little by little the overarching plot is put in place, but always in little bits which were never enough to truly whet my appetite, until the series reaches its conclusion and everything spills forward, making the plot inequally distributed.
However, while this plot is revealed, some very interesting and unusual themes are broached, mostly due to the historical context: war, the occult versus science, slavery, abandon... *Spoiler* and the heroine being born of a rape is extremely unusual coming from the world of general public animation. *End spoiler* I would say those deeper themes are due to the series' light novel origins. Certain arcs were also good finds like Victorique's mother and the Roscoes, the Queen's murder (her name is Coco Rose! Find the pun?). But most of this is developped in the last two episodes. These are the two most interesting for treating the overarching plot, and would have benefitted from more consideration.
My thoughts after watching Gosick were that the plot would have been a lot more exciting if they had scrapped the 'mysteries' and started with episode #23 (before last) and developped the story from there into the #24 episode, if you follow my thought. There were so many more great ideas and finds in those two episodes that a whole plot could have been spun from them. I'll admit it's not much use making a review of what the anime is not, but that is how I felt.

Now to be a little more positive! What I did like was doll-like Victorique being absolutely beyond stubborn and acting like a spoilt princesse, which is an interesting contrast with her past once it is revealed to the audience; it makes her character seem to be a shell she built around herself rather than innate. What really did it for me though was her seiyuu, Aoi Yuuki. I love her voice, as well as other characters she has voiced, and I think she is an amazing actress. She gives Victorique an undeniable uniqueness and portrays her emotions beautifully. Of course I also liked Victorique's wardrobe, usually doll-like gothic with occasional classic. I wish the dresses in the ending video had been featured in the animation! Perhaps the best thing about her is her house. The perfect pink dreamhouse in the middle of a labyrinth, filled with delicate white furniture and a canopied bed - a dollhouse! Victorique is actually often compared to a doll in the animation.
Sadly I didn't much like Kujo, always a little too naive, whether about their relationship he continually claims is friendship or the mysteries they solve, and his character is only ultimately redeemed in my eyes after he goes to war. (It didn't help that I didn't like his seiyuu either). 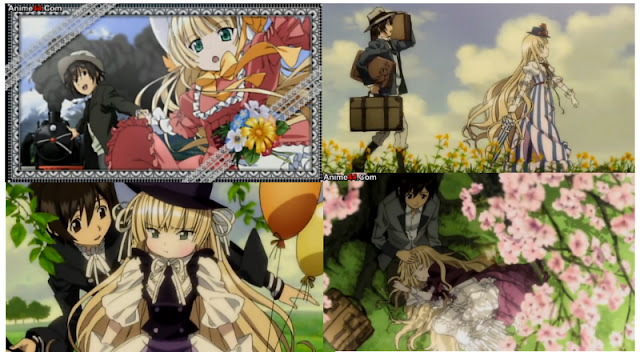 A glimpse at Victorique's extensive wardrobe 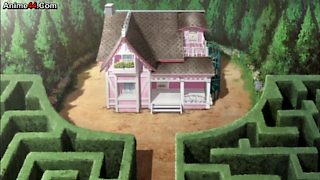 Probably the biggest problem with this animation is that that it tries to have a finger in every pie: it is both light and inconsequential with the problem solving cases, but also goes for a world-wide conspiracy over the war that takes place and broaches darker subjects requiring a bit of thought. Yet this proves too much and the result isn't consistent.

The animation itself can't be faulted; Studio Bones up to its reputation for quality. I loved all the art nouveau inspiration and how it was kept as a constant guiding principle throughout.Opening and ending titles can't be omitted, they were appropriately chosen and rank among my favorite tracks at the moment.

All in all, though I may have seemed negative at times, I quite enjoyed this show, especially its atmosphere and the country of Saubure, but it generated quite a but of frustration and disppointement over what it suggests it could have been and it remains geared towards fan-service.

The opening - to convince you to watch it!

Preparing for the New School Year

Nothing is better than a fresh start after the long summer vacation! Whether that includes stocking up on cute stationery, deciding on a workplan, taking new resolves regarding your studies, or looking forward to joining a club (tick all of the above for myself!), it's always exciting!
I am starting to look out for cute desk furnishing, and a few other items I was missing last year. I'm also  beyond the last stretch of both my eyeliner and my mascara, which have only lasted as long as they have because I keep adding water in them...

So yesterday I decided to go for a run, and coupled that with a trip to get some make-up. As I was checking out the clothes section, I thought about getting a nice shirt to do sports instead of my old sweater, and I was so lucky to find this for 5€! The perfect print, and a nice motivaton to keep moving to boot! Although it's so cute I probably won't want to workout in it.

I also purchased a new bottle of eyeliner. It is the cheap stuff, but 1) it's the only one I can find with a very thin brush rather than a felt/marker tip which I can't handle, and 2) it comes off with just water and doesn't need rubbing, which is bliss for my eyes and rather sensitive skin. (And it's cheap, if I hadn't mentioned that already).

The rabbit slippers I found when shopping with my mom at the supermarket. I tend to rely on the too-large hotel slippers my dad brings home from his travels, but they do so increase my natural inclination to trip over my own feet. I had some pink fluffy ones last year which were still available but these were so much cuter! 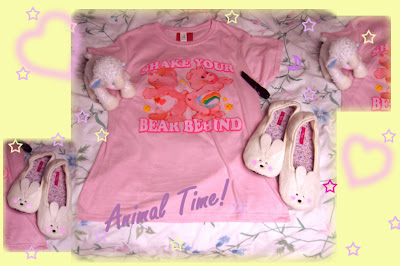 Overloaded much?~ Having fun with the tablet!

Changing the subject, last week-end, I held a booth at a local antiques/second-hand fair, selling old toys and clothes. I had intended to sell a few handmade items, but I forgot them the day of! So much for laying them out to take with me... The reason was, of course, that I was too preoccupied by fixing up my wig and make up. I wore my white Meta dress with my lavender wig, a flower crown from my friends in England, and a flower-printed vintage cardigan. People actually mistook me for a doll on sale whenever I stopped moving!

Unfortunately the weather was hot, but I was lucky I brought my parasol, and the neighboring booth  had a very large one which shadowed me as well. It was fun chatting with my neighbors, and I wish I had bought an adorable and very delicate, blue and gold tea-set from them, but a woman did right before I came. I was however, going to buy a little plushie from them, but they generously gave it to me instead! Isn't the lamb so cute? I don't have a name for him yet though. Any ideas?

Well! What was supposed to be a short break turned out to be longer than expected.
So nice to see you again!
It's been quite a while since I've published anything, but I'm now back and more motivated than ever! I also had to transfer all my previous posts to this new blogger adress because of some spam/virus technical thing which I figured would take me longer to solve than simply switching over to a new adress. Since I had to do that before starting posting again, I kept procrastinating...
Now on to the news!
For the (almost) first time yesterday, I went out with my purple wig, which I was a little nervous about. I wear lolita daily but having never sported unnatural colored hair before, I was anxious to coordinate my outfit especially well. (No photos, unfortunately.) It was gratifying that three times that day, people came up to tell me they liked my style. It's so encouraging to have positive opinions about lolita in the street! One of them was from a little girl who said she wanted purple hair, so I assured her she could if she wanted; she was so cute! And for the first time two mainstream girls roughly my age were interested in lolita, and one boy even knew the name. I wish I had been less shy and told them how much I appreciated their genuine curiosity.
I've also just made this cute keychain to hang on my bag or purse! I went to my not-so-local craftstore to get 3D acrylic (which they didn't have in white, and disappointed me greatly), but when I saw this cute bunny in the pearls section, I knew I had to make something with it! The miniature ribbon was picked out from the last time I made a bunch, add some cute ribbon, and here's the result: 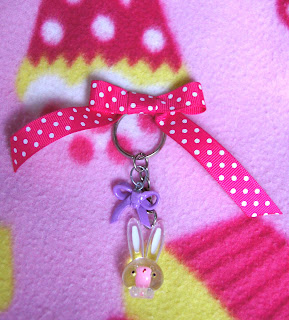 Miss Milly
Sharing my love of all things pink and sweet, but also antique and vintage, japanese fashion, and things unrelated ;)